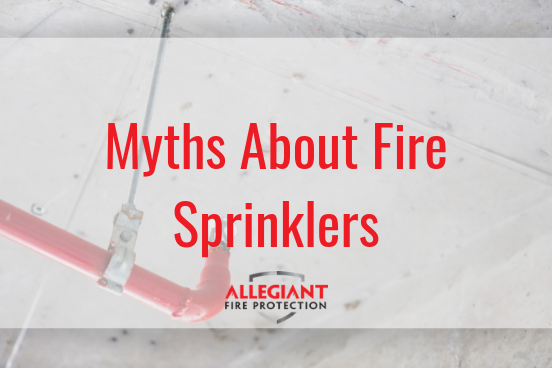 Fire sprinkler systems are unquestionably one of the first and most important lines of defense against a fire. In fact, the preservation of a business’s equipment, information, property, and valuables often depends on the proper functioning of fire alarm and sprinkler systems. It is surprising, then, that the general public does not have a completely accurate understanding of how fire sprinkler systems work. To help remedy that, here are the three biggest fire sprinkler myths that continue to circulate, debunked with accurate facts.

Myth 1: Sprinkler systems extinguish fires Many people think that a sprinkler system’s primary function is to extinguish fires. In fact, fire sprinkler systems are designed to suppress fires by reducing the rate of heat release. Cooling down the fire helps to prevent it from spreading. The degree to which the sprinkler can control the fire depends largely on the material that is burning, the size of the space, and whether or not the blaze is shielded from the flow of water. For example, it may be possible for sprinkler systems to extinguish small fires of free-burning cellulose materials like paper and wood. Larger fires that ignite plastics that burn quickly and at high temperatures may not be fully extinguished. Typically, an effective sprinkler system will only suppress the fire until the local fire department arrives and completes the job with external equipment.

So, if the fire alarm doesn’t tell the sprinklers to turn on, what does? Sprinkler heads are assembled with a thermal element that will either melt or break at a certain temperature. If the heat from the fire is intense enough to trigger the thermal element, the sprinklers will be activated and water will be discharged.

For more information on fire sprinkler regulations and maintenance, please check out our website or the NFPA. As always, it’s better safe than sorry – and the last thing anyone wants is to be caught off-guard because they believed incorrect information about how their organization’s fire sprinkler system works. And myths aside, the most important thing to remember is that it’s important to have fire sprinkler systems regularly inspected and maintenanced so that they do their job in the event of a fire.